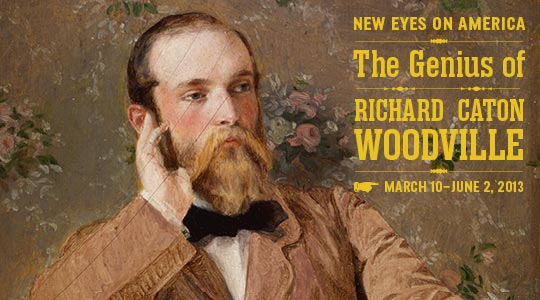 Baltimore—The Walters Art Museum presents New Eyes on America: The Genius of Richard Caton Woodville, an exhibition with richly-painted depictions of daily life created during the transformative years prior to the American Civil War. During a tragically short career, the Baltimore-born and European-trained Woodville (1825–55) engaged with issues that dominated American society, including war, intergenerational communication, and new technologies such as the telegraph and penny press. Woodville was born of a prominent Baltimore family, living blocks from the Walters, and trained in Düsseldorf, Germany, where he conducted his professional career. On view from March 10–June 2, 2013, this is the first monographic Woodville exhibition since 1967, and it travels to the Mint Museum in Charlotte, N.C. June 30–Nov. 3, 2013.

The exhibition includes Woodville’s 16 known paintings, several of which have never been on view, as well as prints, illustrated books and other related works of art to place his career in historical context. The Walters has the largest holding of his works. Woodville left behind no written archives; however, his work was highly acclaimed and widely disseminated through premium prints sent to thousands of subscribers to the American Art-Union, a national art membership organization. His crisp, linear works on popular subjects played an important role in the extraordinary increase in visual imagery available to a broad American audience during his lifetime.

“We are pleased to put the spotlight on this extraordinary painter and a lesser-known highlight of the Walters’ collection of 19th-century paintings,” said Walters Executive Director Gary Vikan. “In his own time, Woodville’s work was as well-known as, and exhibited with, the landscape painters of the Hudson River School. His paintings tell American stories and invite close looking.”

The scenes Woodville depicts are subtle yet revealing of human foibles, rendered on a small scale but addressing the larger events unfolding outside the scenes of daily life, including the politics of manifest destiny, the power shift from the Revolutionary to the Jacksonian generation, and the issues of slavery, war and class difference. Although prevalent at this time, Woodville avoids the stereotyping and caricature of African American figures who are often observers to the central narratives.

“While part of a vibrant artistic community in Düsseldorf, Woodville observed the democratic rebellions of late 1840s Europe,” said Joy Peterson Heyrman, exhibition curator. “Woodville reacted to this environment, creating some of his most iconic works, including Politics in an Oyster House (1848) and War News from Mexico (1848).”

War News from Mexico was painted in the year when revolutionary activity swept Europe and dissension over the expansionist war with Mexico occupied the American political scene. This was not a battle scene, but depicted the home front and centered on the transmission of breaking news by telegraph to the penny press. Politics in an Oyster House takes on Woodville’s characteristically ambiguous view of the interaction between generations inspired to argument by the centrally placed newspaper.

We are deeply grateful to the many funders who have made this project possible, including our lead sponsor, the Women’s Committee of the Walters Art Museum, and our corporate sponsor, Wilmington Trust, with grant funds from the U.S. Institute of Museum and Library Services. The Wyeth Foundation for American Art provided generously for the technical research project. Additional donors, excited about the possibility of shining a spotlight on this marvelous artist, include the Bernard Family, the Charlesmead Foundation, Frederick and Mary Louise Preis, Gretchen Redden, Sally Craig, and an anonymous donor.

The Walters is working with five high schools from Baltimore City, Baltimore County and Frederick County to create the focus show New Eyes on America: Student Response as a companion to New Eyes on America: The Genius of Richard Caton Woodville. Students received a visit from a museum educator who introduced exhibition themes, including new forms of technology and communication such as the telegraph and penny press—both characteristic of 19th-century America. From October through December 2012, the students spent time considering and discussing the Woodville exhibition and created artworks in response. Students developed project ideas, and since technology plays such a significant role in teenagers’ lives today, the majority of the works will contain a digital component. Their works will be on view in a 4th-floor gallery of the Centre Street Building from March 16–June 9, 2013.

A 144-page publication, comprising five essays, a catalogue of the paintings, and an illustrated checklist of works on paper as well as engravings and lithographs after paintings by Woodville, accompanies the exhibition. Published by the Walters Art Museum and distributed by Yale University Press, the soft-cover book retails for $24.95.

Museum hours are Wednesday through Sunday 10 a.m.–5 p.m., Thursdays 5–9 p.m. New Eyes on America: The Genius of Richard Caton Woodville is a special ticketed exhibition, which is free during Constellation Thursday Nights from 5–9 p.m.General admission to the Walters’ permanent collection is free. For more information, go to www.thewalters.org.