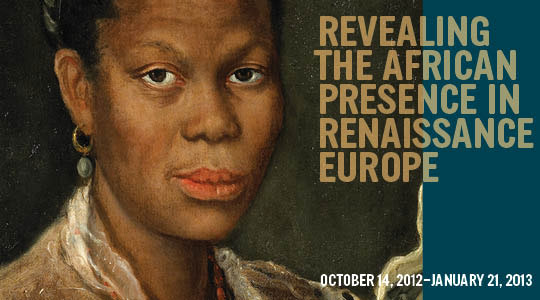 Baltimore—The Walters Art Museum presents Revealing the African Presence in Renaissance Europe, an exhibition exploring the little known presence of Africans and their descendants in Europe from the late 1400s to the early 1600s. The exhibition will look at the roles these individuals played in society. During the European Renaissance, there was a new focus on the identity and perspective of the individual. Africans living or visiting Europe at this time included artists, aristocrats, saints, slaves and diplomats. The exhibition of vivid portraits created from life encourages face to face encounters with these individuals and poses questions about the challenges of color, class and stereotypes that a new diversity brought to Europe. Aspects of this material have been studied by scholars, but this is the first time the subject has been presented to a wider American public.

On view Oct. 14, 2012–Jan. 21, 2013, the exhibition features 73 paintings, sculptures, prints, manuscripts and printed books by great artists such as Rubens, Pontormo, Dürer, Veronese and Bronzino. These artworks are drawn from the Walters, major museums in Europe and the United States, and private collections. The exhibition will travel to the Princeton University Art Museum in New Jersey Feb. 16–June 9, 2013.

“We hope that this exhibition will be a vehicle for conversations about cultural identity,” said Director Gary Vikan. “Through the vehicle of great art, visitors will be able to make personal connections with Africans who lived in Europe 500 years ago.”

An African presence was partially a consequence of the European drive for new markets beginning in the late 1400s. This included the importation of West Africans as slaves, supplanting the trade of slaves of Slavic origin. There was also increasing conflict with North African Muslims and heightened levels of diplomatic and trade initiatives by African monarchs. Publications by African scholars and writers in Europe contributed to a more balanced view of the African presence than previously available from European artists and writers alone.

The first half of the exhibition explores the conditions that framed the lives of Africans in Europe, including slavery and social status, perceptions of Africa, the representation of Africans in Christian art, blackness and cultural difference as well as the aesthetic appreciation of blackness. The second half shifts to individuals themselves as slaves, servants, free and freed people, and diplomats and rulers. The visitor’s experience concludes with St. Benedict (the Moor) of Palermo, widely revered in his lifetime, but also one of the African-Europeans of the 1500s with the greatest impact today.

“Recognizing the African presence within Renaissance society opens a new window into a time when the role of the individual was becoming recognized—a perspective that remains fundamental today,” said Curator of Renaissance and Baroque Art Joaneath Spicer. “We are just beginning to understand the contributions of people of African ancestry in that society, so the exhibition raises as many questions as it answers.”

The exhibition is supported by funding from the Richard C. von Hess Foundation, the National Endowment for the Arts, the National Endowment for the Humanities, the Maryland Humanities Council, the Bernard Family, Andie and Jack Laporte, Christie’s, Kathryn Coke Rienhoff, Lynn and Philip Rauch, Cynthia Alderdice, Joel M. Goldfrank, CANUSA Corporation Charitable Fund, Constance R. Caplan, Stanley Mazaroff and Nancy Dorman, the V.A. Reid Charitable Fund, Harbor Bank of Maryland, the Flamer Family Fund and other generous donors. The publication is generously supported by the Robert H. and Clarice Smith Publication Fund. This exhibition is supported by an indemnity from the Federal Council on the Arts and the Humanities.

Chafariz d’el Rey in the Alfama District (View of a Square with the King’s Fountain in Lisbon), Netherlandish, ca. 1570–80
This scene of daily life in Lisbon is astonishing for the concentration of Africans from a range of social and economic levels, from a slave in chains to the knighted man on horseback. Black people made up nearly 10% of the city’s population, more than anywhere else in Europe at that time.
Portrait of Maria Salviate de’ Medici and Giulia de’ Medici, Jacopo de Pontormo, ca. 1537
Free descendants of slaves were found at all levels of European society.  The little girl with her guardian is Giulia de’ Medici, daughter of Alessandro de Medici, duke of Florence, the latter thought to be born of a union between Cardinal Giulio de ‘Medici and an African slave. Giulia enjoyed an aristocratic lifestyle and her descendants thrive today. The painting is considered to be the first formal portrait of a child of African ancestry in European art.
Portrait of an African Slave Woman, Annibale Carracci, attrib. 1580
Paintings representing real individuals in servitude primarily show them in domestic roles, such as this maid from the fragment of a larger portrait. She has remarkable presence, sensitively conveyed by the artist through the ambiguity of her facial expression.
Los tres mulatos de Esmeraldas (Portrait of Don Francesco de Arobe and his Sons), Andrés Sánchez Galque, 1599
Rulers and diplomats were free to assert cultural difference in their portrayals in a way that African slaves in Europe could not. This European style portrait “likeness” was sent to the Spanish king by Don Francisco de Arobe, head of an Ecuadorian community founded by escaped slaves. He and his sons present themselves in European-style dress, but adorned with gold ornaments that were traditional local markers of status preceding the European conquest.

The Walters worked with five middle schools from Baltimore City, Baltimore County and Anne Arundel County to create the focus show African Presence: Student Response as a companion to Revealing the African Presence in Renaissance Europe. An educator visited each school to discuss the themes of the exhibition. The students created their own artworks, including a mural, diptych, book, mixed-media collages and digital media pieces, in response to portraits in the exhibition. Their works will be on view at the Walters in a 4th-floor gallery of the Centre Street Building from September 15, 2012–February 3, 2013.

A publication comprising five essays and an illustrated checklist accompanies the exhibition. Published by the Walters Art Museum, the soft cover book is $24.95.

Museum hours are 10 a.m.–5 p.m. Wednesday through Sunday. Beginning Oct. 4, the Walters will also be open on Thursday evenings from 5–9 p.m. Revealing the African Presence in Renaissance Europe is a special ticketed exhibition. Starting Oct. 4, special ticketed exhibitions will be free on Thursday evenings from 5–9 p.m. General admission to the Walters’ permanent collection is free. For more information, go to www.thewalters.org.